2021 October - The Day I Fly My Homebuilt Airplane

With Canada loosening COVID-19 related border measures this past summer, air travel to Japan is slowly ramping up. The passenger jets grounded by the pandemic and those who fly them are longing for the day they return to the sky. Their safety is ensured by painstaking work performed by aircraft maintenance engineers who work around the clock to inspect, maintain and repair them. Yukihiro Imagawa is one such engineer, working for WestJet Airlines. He sat down with Japanab to tell us about his pursuit of happiness and love of airplanes. 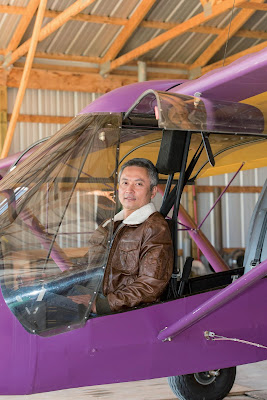 I was born in Toyohashi, Aichi and moved to Sakai, Osaka shortly after birth. When I was four, my parents divorced, and I moved back to Toyohashi with my mother to be closer to her family. She wasn’t always in good health, but she overcame the challenges and single-handedly raised my sister and me.
As a little boy, I loved playing with robots and electronics, and at the age of three, I had already begun taking apart clocks and radios with a screwdriver. Music was another love of mine, and I played the trumpet in a brass band during junior and senior high school and was a bass guitar player in a rock band.
To pay off the large student loan I received while attending high school, I decided against going to college and instead got a job at a local manufacturer of camping trailers. In my first year, the company flew me out to Los Angeles for parts procurement and training. This was the trip that set the course of my life. It was my first time traveling abroad on a Boeing 747 Jumbo Jet. As I flew over the American coastline dotted with people the size of peas, I thought to myself, “I am as tiny as those people on the ground, and so are my worries and constraints.” My attitude shifted in that moment and I decided to set myself free and try my hand at living overseas.
Seeing for the first time how people outside of Japan lived also piqued my curiosity toward the outside world significantly. And I became deeply attracted to airports and airplanes as a place and vessel filled with travelers and their dreams.

The dream to fly my own airplane
After that life-changing experience, I got to work honing my English skills through language classes and radio lessons and saved up every penny to study abroad. After five years, I was able to go to Kelowna, British Columbia to attend a language school and live with a host family at the age of 23. Serendipitously, my host father had a pilot license and took me on my very first flight on a Cessna aircraft. This is when I started harbouring a dream of one day flying my own airplane. As luck would have it, the cost of getting a private pilot license at the time in Canada was around $9,000 which was staggeringly lower than the 5 million yen tuition in Japan. I jumped on the chance and shortened my language school from one year to 8 months so that I could attend a flight school to obtain a private pilot license. There were so many complicated weather and legal terms in class that I had to record every lecture on tape and listen to it over and over again. Motivated by the aspiration to be a pilot and determined to make the most of my savings, I toiled away in school. My English probably improved at a far greater pace than had I stayed in the language school. I was over the moon when I found out I got my pilot license.

A job to bridge Canada and Japan
Returning to Japan after a year in Canada, I experienced reverse culture shock and started searching for ways to get back to Canada. Canada-related jobs were scarce, but one day, I came across a sales flyer of Canadian-imported homes in a newspaper. I jumped on the phone to call the company and negotiated a position with them on the spot. It was mainly a sales position, but they also let me handle import arrangements so I could put my English skills to use. I was also unsuccessfully reaching out to Canadian companies from Japan for job openings.
When I was 28, I decided to take a chance and spend another year in Canada on a working holiday visa. I wanted a job that somehow brought Japan and Canada closer together, but it was no easy task. As my hope and savings were both running low, Loewen Windows, a high-end wood window manufacturer that I dealt with in my previous work in Japan, hired me to be their Japanese market customer support representative. My manager at Loewen Windows was very supportive of me both professionally and privately and helped me obtain the work permit and permanent resident status. I reciprocated by devoting myself to the company and was eventually promoted to International Territory Manager and Sales & Customer Service Analyst. I was looking after all international markets outside of North America and managing sales forecasts and performance monitoring of each division in the company. It was nothing but smooth sailing. I went on 5-6 international business trips in a busy year and met my wife on one such trip to Japan.

The search for my true calling 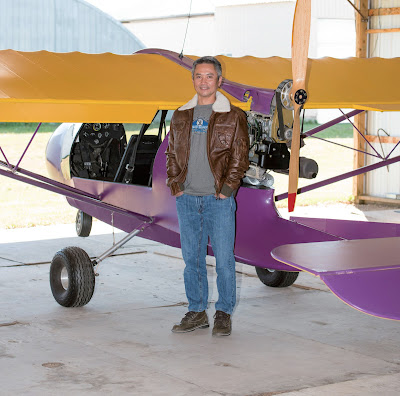 But nothing good lasts forever. The financial crisis in 2008 triggered a major drop in demand for luxurious goods such as wood windows, and the company was forced to lay off half of its staff. I had thought I was safe because of my good sales record, but they decided to pull out of all international markets aside from the U.S. and no longer required my service. I was paralyzed by the deep sense of loss. For a year, I looked for a similar role without much success. A part of me was beginning to wonder, “do I really want to continue what I was doing before?” Throughout this time, my wife never questioned me, kept her faith in me, and gave me the space I needed to figure out what it was that I really wanted to do with my life. A turning point came one day when my mother asked, “have you considered hands-on work like you used to do, building camper vans?” Her words reminded me of the reason I came to Canada: to live my dream. I needed to keep my doors open to all possibilities, rather than clinging to my field of experience. I realized my calling was in technical work, but what was it that I can be passionate enough to devote my whole career to? The answer I finally found was as an aircraft maintenance engineer. With no previous experience, I was starting from scratch again. Despite my worries, my wife open-heartedly endorsed my plan.
I graduated from the diploma program for aircraft maintenance engineer at the RedRiver College in Winnipeg as the top student among much younger classmates in 2011. In the same year, I moved to Calgary to join Jazz Aviation’s aircraft components repair service team. After six months, however, the company decided to reduce its workforce, and, as the newest employee, I was the first one to go. Fortunately, a colleague took pity on me and referred me to North Cariboo Air, a private charter company. There, I was finally able to work as a maintenance engineer for passenger aircraft and completed the required apprenticeship hours so that I could write Transport Canada’s Canadian Aviation Regulations exam to be certified as an aircraft maintenance engineer. I passed the test and went on to obtain the “M1” maintenance license for smaller airplanes and then “M2” for mid to large-size aircrafts. After four years at North Cariboo Air, WestJet Encore hired me, and I got certified to service Bombardier Dash-8 Q400 and obtained the airline-specific Aircraft Certification Authority (ACA), which enabled me to authorize a plane to take off after inspection carrying passengers. Since moving to the parent company WestJet in 2017, I took every opportunity to expand my certification and obtained the ACA, service accreditations for all of WestJet’s models including the nextgeneration Boeing 787, and “Run-up ＆ Taxi” for each model so that I can operate the plane on the ground and test its engine. The work is physically demanding with night shifts and takes a huge mental toll as even the smallest mistake can prove disastrous. Yet, I am truly happy to have found a career that I could be so passionate about and am filled with pride that my work ensures the safety of airplanes and their passengers. My choice of career has always been determined by how much I like the work, rather than how much I can earn. It’s because the happiness I attain by doing the work I love is far greater than the happiness I receive from monetary gain. Looking back, the rough patches in my life later turned out to be stepping stones for better outcomes. I didn’t grow up in a wealthy family, but that gave me the backbone and fortitude to pursue my dreams. I also cannot understate the vital role my friends and mentors played in steering me in the right direction when there was a fork in the road. The healthy years in one’s life are numbered, and I was afraid life would pass me by if I waited for retirement. That’s why I bought my very own airplane and hangar this year. That’s part of the dream I harboured ever since getting a private pilot license at the age of 24. The ultimate goal is to take to the sky, piloting a plane I built with my own hands. To realize that dream, I will continue to seek and cherish challenges in my life.